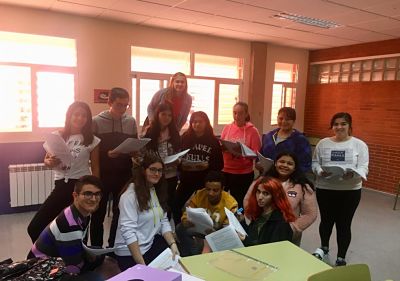 The proposal that we include under the title Educaescena Project arises from our desire to bring the world of the scene closer to ESO and Bachillerato students, with two main purposes: to rescue the value of dramatic texts as a literary language and to show in a practical way how it is the staging process. The central axis of this project includes the representation of a theatrical work that, due to its theme, is very enjoyable for all kinds of spectators.

The Theater Group of the IES Sabina Mora "Jacarandá Teatro" is going to participate this school year, like two years ago, in the Performing Arts Festival of the educational centers. This course the teachers involved in the Educaescena Project are Nuria Clavero and Cruz de la Ossa. This activity, proposed by the City Council of Torre-Pacheco, is proposed as a possibility of exchange between the centers, will be held at CAES for a period of time closed with the centers at the end of the course.

The pedagogical methodologies that make use of theatrical tools for didactic purposes do not follow the same guidelines as the common concept of theater in the classroom. A term is needed to clarify and differentiate this use of theater: that term is dramatization.

The theater is based on the actor, the space and the audience. The word itself contains in its Greek root theaomai the indicated verb: contemplate. Referring to the root of drama, drao we simply have to do. The theater stands up in order to be watched and the drama involves just putting into action.

Both theater and dramatization are based on the ability to embody and develop a role. The body is used as a means of expression, symbolic use is made of space, time and objects. But in the theater, what really worries is the end result. Dramatization is a process of creation that uses certain techniques and elements of theatrical language, using them as playful or didactic support. The roles of spectator and actor are easily interchangeable. Sometimes a communicative function is pursued and in others a simple personal development of the participants. The theater places the emphasis on the show and the viewer, while the dramatization places it on the action itself, in the process that leads to the performance.

Contributions of dramatization to the educational curriculum.

Dramatization as a teaching tool allows work in one area of ​​the curriculum at the same time as with other skills. Among the many contributions of dramatization to the educational curriculum we can highlight the following:

That is why the 4th ESO and 1st Bachillerato students who form the Theater group of the IES Sabina Mora "Jacarandá Teatro", with new additions, intend to live the experience that is born from a text, which is primarily literary, but ends up being verbalized and represented during the subsequent process.